I have never been one for extracurricular activities. When I was little, I did a little bit of Jazz, Ballet, and gymnastics, but they didn’t last too long. I was never good at sports, nor did I care enough to even want to try them. I was also not a fan of doing plays or anything else really in school (other than school work) since I wanted to make sure I could come home and do my own thing, which was mostly focused on reading and playing video games. I was in band until high school when I had to drop due to a sick family member, and I wish I didn’t have to do that since I loved every moment of band, but it just was not in the cards. It was not until I was 12 that I started Taekwondo and guitar lessons that I really even put much thought into extracurriculars. I enjoyed both of those activities and continued to do them for years (thanks family for footing the bill!). I was able to put these and a few clubs I joined on my college application and my essay was about me getting my Second Degree Black Belt Decided in Taekwondo. I wished I had done more, but it was too late to turn back time.

Now I have my own children, and my daughter is getting to the age where she wants to try new things. My husband has always been athletic, playing tons of sports in school, and she was interested in soccer, so we signed her up last year. The first season went well, she was active and working hard to learn. We had her in the younger class since it was her first time but her being a bit on the older side we saw her doing things the other children could not (listening skills are way different between a 2 year old and a 3 year old). For the next season, we put her in the older class and you could see she just was not at their level and was not having as much fun as she did the season before. We kept making her go, making sure she did not look like a quitter since we did not want to raise her that way. But her heart wasn’t in it and we could not figure out way. Towards the end of the season, it was a fight just to get her to go. There were tantrums and crying, the whole 9 yards.

This was our life….

We finally got concerned enough to take her to the doctors where we found out her ears were severely infected, which would account for her lack of energy and enthusiasm.  It has always been a constant struggle with this kids ears, the doctors kept telling me she must have a high pain tolerance since she never complains or whines about any pain. Heck, she never even acts like she is in pain. The ears were bad enough to get the tubes and she even needed an adenoid removal as it turns out they were give her sinuses 95% coverage!

My husband and I felt horrible. We had pushed this kid so much and kept making her do something she didn’t want to do, and for what gain? To learn not to be a quitter? She was too little to even understand that the reason she did not want to attend was because she was so worn down and ill.  It really made us think about what message we were trying to send to our children. How much can you really push someone before they just break? How can you push the “never give up” message without making your kids hurt? 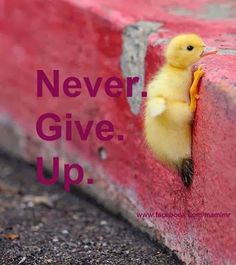 This is something I am not sure I even have the answer to. We just signed our daughter up for Children’s Choir and she already does not want to go. We have not even had our first session! But, we are making her go and try it out and I have already promised her that if she does not like it, she does not have to attend. Is that wrong of me? Should I make her go to the sessions a few times and have her try it out? She keeps asking me to do Karate but we are afraid that she will try it once and then quit. But maybe that is not a bad thing. Maybe we are meant to try everything and stick with one thing we truly love. Maybe we need that push to get us to grow into who we really are!

Being parents means that we grow with our children. We learn something new everyday and try to be the best that we can be to protect those beautiful little lives. We push these little creatures to be better at school, more athletic, popular but we do not see when we are pushing them too much. Some kids break like ours did and cry until they have no more tears. Others will do everything they can to make mom and dad happy only to bring themselves to the brink of exhaustion. Keep that line of communication open with them and make sure they are doing all these activities because they want too, not because they feel like the NEED to.

What are your thoughts? Do you push your kids? Do you let the pick what they do? Do we as a society expect too much?

I am a 29 year old from Pennsylvania. I am married to a wonderful husband and we have two children both named after super heroes! A girl who is 4 and a boy who is 1. Most of my time is spent working, being a mom, and gaming.
Uncategorized
|  Tags: Family, Kids, kids, TBT, TBT, Throw Back Thursday, Throw Back Thursday

One thought on “#TBT: When Are We Pushing Too Hard?”