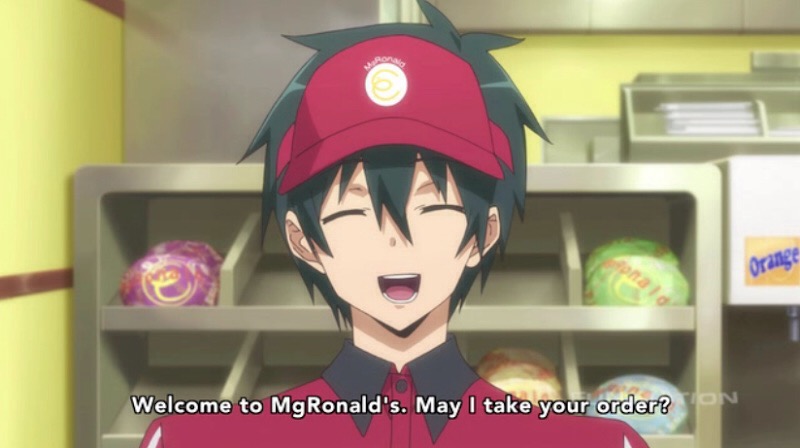 I’ve always said McDonald’s is the devil, now he works at one, or well… a “MgRonald’s”. Intrigued yet? You should be; The possibilities in that sentence alone have hilarious implications and it doesn’t disappoint. It is one of the most genuinely funny anime I’ve seen, it does seem a little out there but bear with me and let’s get into this. 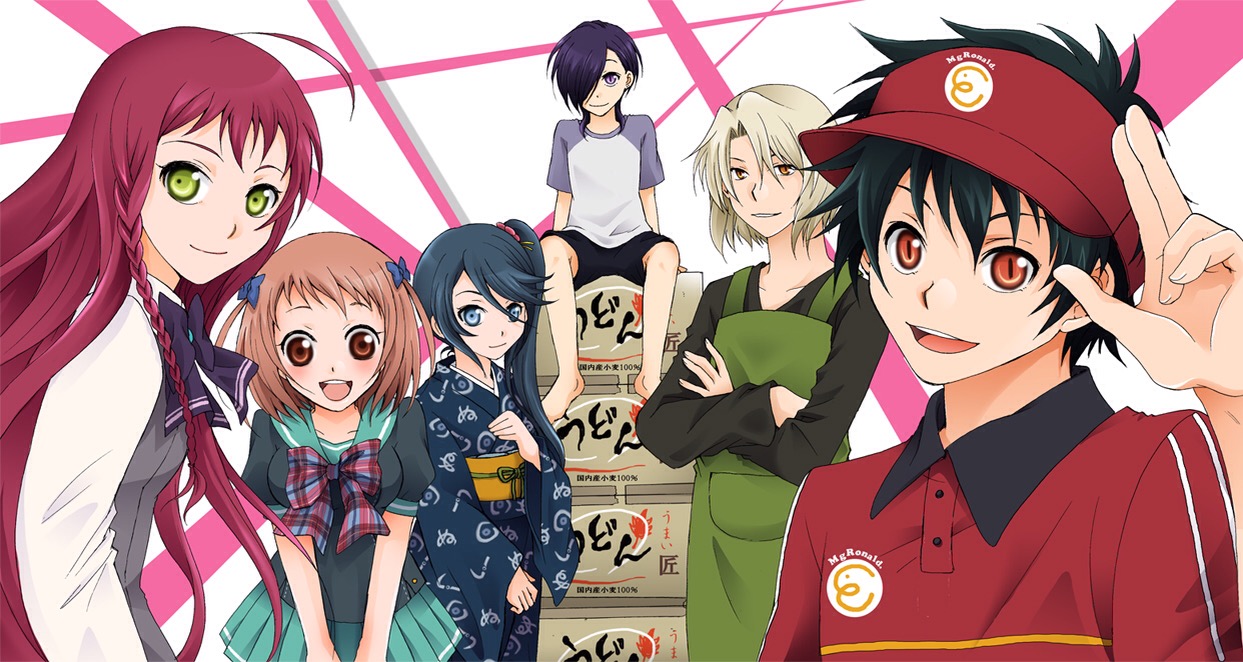 Satan and the general of his demon army find a way into our realm, stripped of their power and glory, they have to find a way to adjust to the real world. So where do they start? A fast food job and living on a budget. Satan’s general, Shirou, still acts as an advisor and basically a slave to the Devil King making their interactions with everyday things downright silly in the best way. All the while, Satan, now going by Sadao Maou, is working his way to the top of the fast food chain while one of his co-workers falls in love with him more and more everyday despite his obliviousness. Her character is a tad too oversexualized for my tastes and there isn’t much to her for the first part of the series; eventually she comes around and becomes a regular part of the group along with a certain hero who is hell bent on putting an end to Satan once and for all. 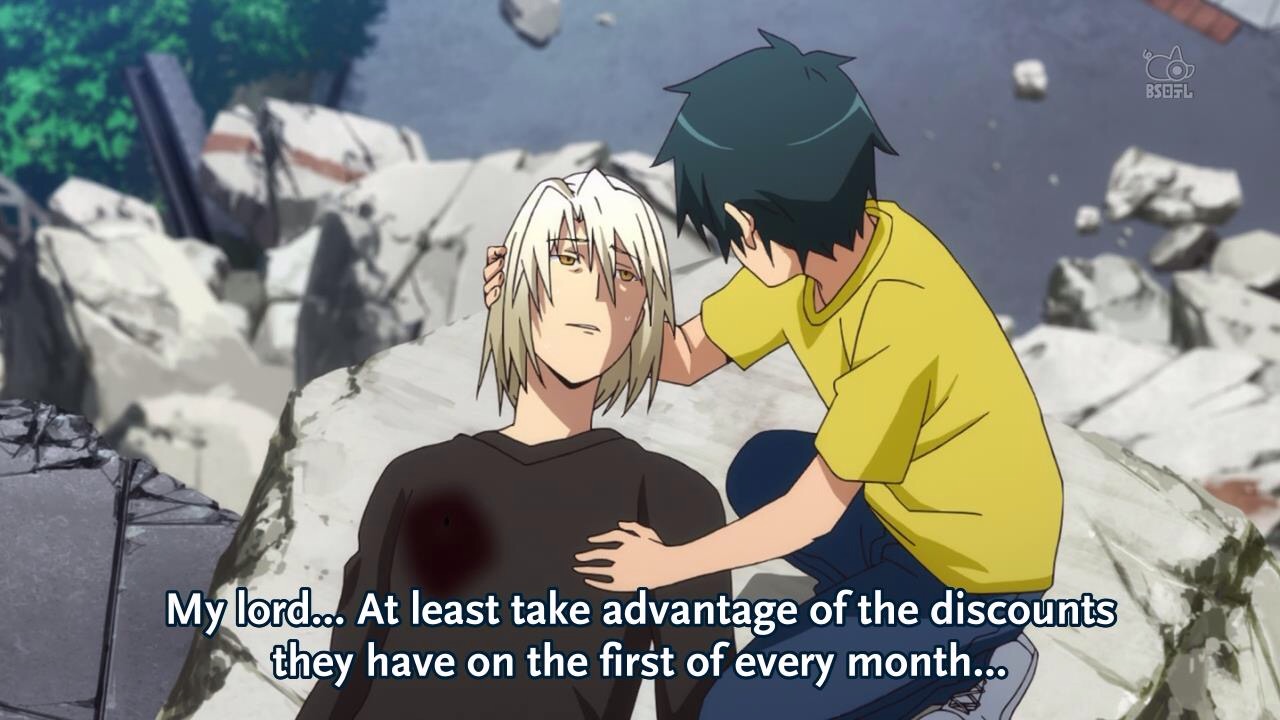 As the season progresses more famous names(such as Lucifer) come into the modern world and while they pose a threat, they also have to adjust to the world. The aforementioned Lucifer develops an addiction to online shopping, which to me, is the funniest thing in the world. Before that, they are sent to the mortal world to defeat Satan. Little do they know the Devil still has a few tricks up his sleeve and is able to use a bit of magic at a time which makes for some really entertaining battle scenes. However, the real crowning jewel of this show is the group dynamic and how they react to the world around them. On the romantic side of things, Satan is quite the hot(all these puns are sort of intended) commodity with the ladies. A strong work ethic, devilishly handsome, and mysterious. What’s not to love?. His co-worker Chiho certainly sees it, she also sees Emilia the Hero constantly stalking him, mistaking her mission of putting an end to the Devil for affection. However, there could be a brewing romance between Emilia and Satan. At least from what I can tell. All of this adds to the genius concept of supernatural beings making their lives work in the real world. 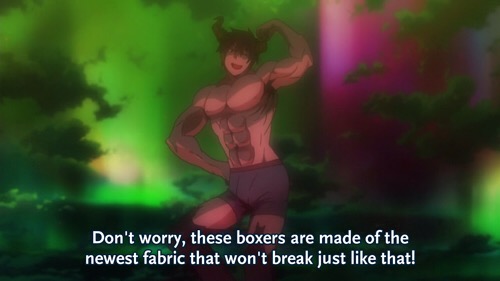 The series isn’t without its faults of course; you don’t see much of a perspective from the world around them after they use magic. Satan himself uses a large deal of magic to rebuild a bridge in the middle of Tokyo. How does the city continue to function? I’d imagine there’d be riots in the streets. Certain female characters being oversexualized and others feeling threatened by that sexuality seems like a real-world issue but feels like typical fan service at its worst. 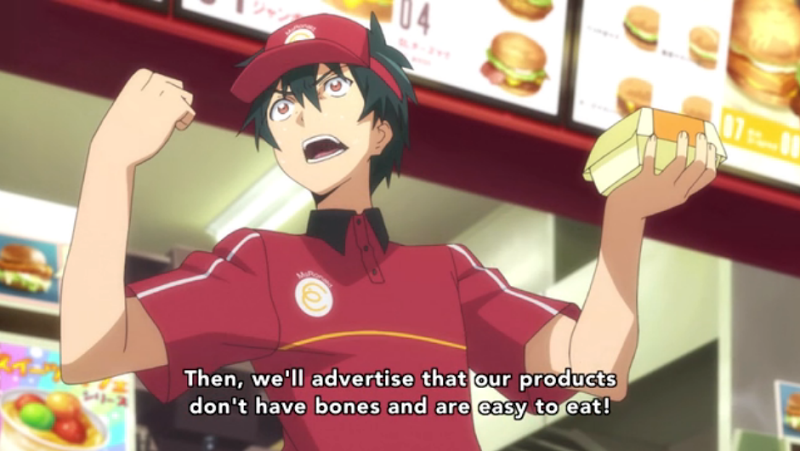 At the end of the day, this is a highly entertaining series that deserves another season and your viewing. I’m already missing the wacky misadventures of Sadao Maou and his friends. Due to certain situations and some violence I’d say it’s meant for 13+. I’ll be doing a tiny review of the 1st manga entry of the series in the near future so keep an eye out!
I give it a rating of 8.5 Big Mg’s out of 10 super sized fries.

As always, find me on the Twitter machine @Umarumon or email me a series to check out at Umarumon@gmail.com

P.s. If you’re going to Otafest Aurora in Calgary hit me up! I’ll be cosplaying Kaneki from Tokyo Ghoul :3

3 thoughts on “Anime Review: The Devil Is A Part-Timer!”