That’s really the only thing to say after it’s first season came guns-a-blazing out of the gate. “Rokka” rarely takes its foot off the gas pedal, its superb sense of mystery and suspense will keep you glued to the screen and frothing at the mouth to see what’s next. I wish I was exaggerating. There was definitely frothing happening at one point.

Rokka follows 7 Braves as they try desperately to stop the awoken Demon God. One problem though. There is only supposed to be 6 of them. Who is the fake? What is their goal? And who exactly put this plan together to stop the Braves?. What follows after that revelation is one of the most intriguing mysteries I’ve come across in an anime. Trapped inside a forest, covered in a shroud of fog, our 7 braves must confront eachother and weed out the seventh. Paranoia, Personal feelings, jealousy and more all come into play; Not once is there a clear choice of who it could be. That, in my opinion, is an amazing feat in of itself.

As the season progresses you meet more of your would be heroes, each with their own abilities and diverse background, it really made certain interactions a real treat to watch. Now, You must be wondering by now…who are they? Well let’s dig into that spoiler free!

First up, you have Adlet Mayer, the self proclaimed strongest man in the world. His arrogance is only matched by his intelligence and fighting ability.

Next is the Saint of Gunpowder, Flamie Speeddraw. The deadliest Woman with a gun, combined with her cold attitude and quiet untrusting nature, she is as much a mystery as the show itself. 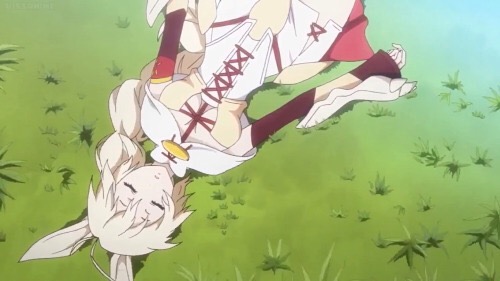 Princess Nachetanya. The Saint of Blades. Pretty and dangerous. Her ability to control floating daggers makes her the deadliest of the Braves. Also, bunny ears make me happy.

Right behind her is Goldov. The princess’s personal bodyguard and general all around badass. Most of his decisions are fuelled by his love for the princess.

Don’t let this little girl fool you. Chamot is considered the strongest of the Braves and loves to kill. She has an actual swamp in her stomach! You really won’t want to see what happens when she throws up.

One of the oldest Saints, the Saint of the Mountains, Maura Chester. She has the ability to control the earth around her and echo her voice. Easily the most paranoid of the Braves and incredibly stubborn. Reminds me of a ground type Pokemon and I like it.

Saved the best for last. Hans Humpty. An assassin who managed to get a king to pay him to kill the Demon God, despite it being his duty after being chosen as a brave. Quick, agile, great critical thinker, and he acts like a cat. Did I mention he acts like a cat? Meow.

Now that you know the Braves I have to mention that the animation itself is top notch. It’s fluid, beautiful, violent and dark. The team behind it really knocked it out of the park and created a world filled with beauty and an underlying evil that is always looming, waiting, and more ready than ever. The first time I watched it, it reminded me a lot of Fire Emblem. Any fans of that game series will be sure to love this series. Lastly, I consider this to be one of the best new shows of the summer season and pray we get a second season.
I give it 9.5 fake Braves out of 10 Demon Gods.

I’d also say it’s for 13+, it is violent but about on par with Dragonball Z.

Thanks for reading! Feel free to message me to chat about this show or any other!

3 thoughts on “Rokka -Braves of the Six Flowers- Review”