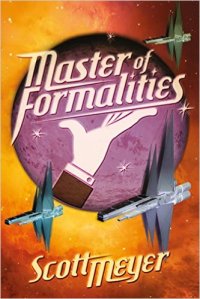 Kid Friendly Rating: 10+ The book includes some details about an ongoing war, but descriptions of the violence are not especially gruesome or realistic.

Synopsis: Wollard is Master of Formalities for House Jakabitus, one of two major families in the galaxy (along with House Hahn) whose planets have been deadlocked in conflict for centuries, although the reasons for the war have become vague.

As Master of Formalities, Wollard wears many hats. He serves as official advisor to the House matriarch on issues of good form and interplanetary relations, he serves as a sort a household head butler, and he also reports to the Arbiters, and impartial interplanetary governing authority who appoint Masters of Authority to each ruling House.

When the Hahn ruler’s only son is taken as a prisoner of war, Wollard suggests a course of action that he believes could bring an end to the war, once and for all. Under Wollard’s advisement, the Hahn prince is held as a ward of House Jakabitus.

Wollard has engendered a great deal of respect in his role as Master of Formalities, but his goodwill and position are quickly put under a great deal of strain when plans don’t go exactly as expected.

Wollard is a sympathetic figure, as he clearly values his position, and is loved by his colleagues, but his respect for his job can sometimes lead him to make decisions that are not necessarily in his own best interests. It is very interesting to watch him balance his position with his will to give proper advice as pressure mounts.

Scott Meyer, currently better known for his popular “Magic 2.0” series (Sarindre previously reviewed book 1 of this fun series here), took a break from time-traveling wizards to write this one. I’ve greatly enjoyed that series, and would have happily read another, so I decided to give this book a try. I’m really happy I did.

Meyer turns down the magic and turns his dry and witty sense of humor to 11.

This book doesn’t have a lot of one-liners or memorable jokes, but Meyer is such a clever writer, with really great grasp of the humor inherent in bizarre or awkward situations, that I found myself laughing aloud several times. I was especially reminded of Douglas Adams’ fantastic Hitchhiker’s Guide to the Galaxy series, both in the science fiction setting, and the off-kilter sense of humor. Like Adams’ series, however, this story is really weird. If you prefer non-fiction or realistic fiction, this may not be the book for you.

Final Thoughts: I have to say, I’m looking forward to the next story in this series even more than the next installment in Magic 2.0. I give it 4/5 stars. If you love Hitchhiker or Spaceballs, give it a shot!

One thought on “Novels for Nerds Presents: Master of Formalities”