Recently a local orchard started making up boxes of produce that they sell quite cheap, especially when compared to local CSA programs, for 27$ you g 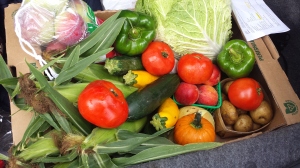 et a giant box of fresh produce picked that morning!  Once I got the box home and sorted, I had to start finding recipes to make with all the goodies I picked up!  One of the veggies were 3 quite large zucchinis/summer squash.  My family totally loves zucchini bread but now that we weren’t eating all those grains and stuff, I wanted to find an alternative.  Pinterest led me to this:

First I used the grater in my food processor, I put one through it, and there was so much I immediately decided to double the recipe.  Go big or go home

!  Second, I dried it all.  Drying zucchini is an experience. I used a few sheets of paper towel and made a little bag with the zucchini inside and squeezed it all until there was nothing left.  I can’t say that it’s something I want to do again and I am SURE there is a better way!

I then basically mixed all the wet ingredients, added all the dry ingredients and then added the zucchini.  If you guys have read any of the other posts I am guessing it’s apparent that I am a lazy cook.  The less steps and dishes the better, so I am prone to skip things and cut corners when it comes to doing things all separate.  Most of the time it works out, others, well, not so much.  This time it worked fine.  When mixing up all the wet ingredients I noted that the recipe was calling for

12 eggs. I haven’t been making grain free food for a real long time, but I know that a lot of these end up with an eggie taste because we rely on the eggs for fluff and rising.  However there was NO WAY I was putting 12 eggs in there! I ended up deciding on 8 for some reason.

After I got it all mixed up I added the chocolate, I used about half the bag since there needed to be some for the top as well.  Then, I split it up into two 8×8 pans, I think the metal pan lies.  I think it’s bigger than 8×8 even though that’s what the sticker said on the pan when I bought it. Added the rest of the chocolate on top of the two pans and they were ready for the oven!

I baked these at 350 for about 30-35 mins.  I took mine out a little early because it seemed to be spread quite thin in the metal pan and I didn’t want it burnt to a crisp.  The kids like to make fun of my mad baking skills when that happens! In the end everyone loved it, I loved being able to say “ya sure go have more cake” and then pans didn’t even make it through the whole day between 6 of us! 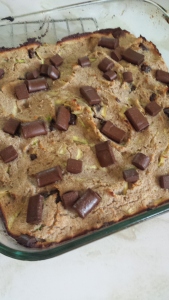 I am a 29 year old from Pennsylvania. I am married to a wonderful husband and we have two children both named after super heroes! A girl who is 4 and a boy who is 1. Most of my time is spent working, being a mom, and gaming.
Uncategorized
|  Tags: Cooking, Cooking, Fitness, Food, Food, Grain Free, Grain Free, Paleo, Pinterest, Pinterest, Recipe, Recipe