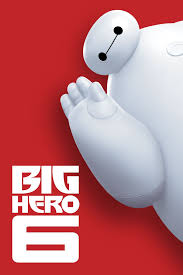 Synopsis: Robotics prodigy Hiro lives in the city of San Fransokyo with his aunt and his older brother. While trying to apply to one of the most prestigious schools, Hiro’s brother is killed in a fire. After his brothers death, Hiro becomes recluse until his closest companion, Baymax a robot whose sole purpose is to take care of people, discovers something interesting, it seems like the fire might not have been an accident at all! Hiro is thrown into the middle of a dangerous plot, and he transforms Baymax and his other friends into a band of high-tech heroes as he seeks revenge and justice for this brothers death. 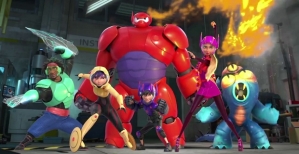 Baymax: [to Hiro, who’s stuck and buried under a pile of action figures] On a scale of one to ten, how would you rate your pain?
Hiro: [irritated] Zero.
Baymax: It is alright to cry.
Hiro: No! No, no, no, no, no!
Baymax: [picks up Hiro and holds him like a baby] Crying is a natural response to pain.
Hiro: [jumps out of Baymax’s arms] I’m not crying.
Baymax: I will scan you for injuries.
Hiro: [firmly] DON’T scan me.
Baymax: Scan complete.
Hiro: Unbelievable.
Baymax: You have sustained no injuries. However, your hormone and neurotransmitter levels indicate that you are experiencing mood swings, common in adolescence. Diagnosis: puberty.
Hiro: [surprised] Whoa, what?

Fun Fact: When Baymax first tests out his new rocket fist in Fred’s mansion, the statue that it destroys is a statue of Hans from Frozen.

Final Thoughts: I really enjoyed this movie and thought it was great for kids. There is the sadness aspect when Hiro’s brother dies, but most younger children will not even understand. This movie has strong, positive characters that any parent will be happy to have their children watch. Plus the movie is funny which will entertain both you and your children!

I am a 29 year old from Pennsylvania. I am married to a wonderful husband and we have two children both named after super heroes! A girl who is 4 and a boy who is 1. Most of my time is spent working, being a mom, and gaming.
Uncategorized
|  Tags: Adventure, Animation, Animation, Big Hero 6, Children, Children, Comedy, Comedy, Kids, kids, Movies, Parenting, parenting, PG, PG, Rated G for Geek, Rated G for Geek