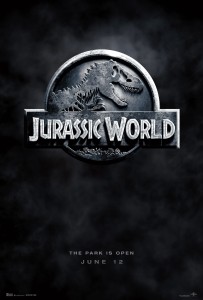 6/10 – Limited amount of sexuality. I believe Star Lord kisses Gwen Stacey once or twice. To be honest, I was distracted by dinosaurs. Either way though, they’re two sexy people, so there is a level of intimacy between the two but that’s minor at best.

The vulgarity is limited as well. At worst there are a few snide comments throughout, but with Chris Pratt it comes off well. Really considering the circumstances, dinosaurs running rampant in all, I’m pretty sure I would swear a lot more if I weren’t already dead.

So now comes the violent aspect of the story. again all things considered with a crazy dinosaur rampage, the violence is considerably limited. sure some people get picked up by flying reptiles that would be physically incapable of doing so, but there are also a few that are eviscerated by velociraptors, and the Indominous Rex…. But all things considered detachable level of graphic violence is very tame.

I asked my daughter, Isabella, too rate this movie in a similar way to what I just showed you. First off my daughter believes that Chris Pratt is very pretty and she thinks that his character Owen should be in a relationship and be married to Claire.

Secondly when faced with a question about vulgarity that during the truck ride over to the movie theater I swore more than anyone else in the entire movie. And my daughter even pointed out that i was just driving a truck and that those people were being attacked by dinosaurs…..

And last I asked Isabella how she felt about the scary scenes and violence in the movie. while she admits to having jumped a few times at various moments she even believes that the violence in and of itself is limited. Sure, someone may get eaten but when your swallowed whole you don’t see much.

So I’m thinking either my daughter has good taste, or she’s growing up to be a sociopath. Either way whatever. Click here for the Parent Rating Guide!

So we all know the original Jurassic Park story, the summary being: “God creates dinosaurs, God destroys dinosaurs. God creates men, man destroys God. Man creates dinosaurs.” And this story is none too different, meaning that is pretty freaking awesome.
First off there are things that occur in this story that should have been addressed in the first movie. A prime example is the lead geneticist, Dr Henry Wu, is an egotistical prick of a human being. This was not addressed at all in the first movie, but in Jurassic World it is painstakingly obvious. And he even goes on to mention that the dinosaurs people are seeing on the island or not what they would look like without their manipulations. Velociraptors are the size of wild turkeys and have feathers, some of the more archaic species like Stegosaurus carry themselves in ways that more accurately represent a child’s 1980s idea of a dinosaur, then how it would be in real life. Again this was something into that in the Jurassic Park novel, but never expanded upon.

The special effects, while not perfect are still quite exceptional. Sure there may be moments that are iffy, but the close ups of Indominus Rex hold together really, really well as do most of the others. One that I was most surprised by was the baby Triceratops and the Ankylosaurs and without ruining too much more I will say that they did include the same Tyrannosaurus from the original Jurassic Park which is awesome.

From TV trailers themselves you get the general feel for the movie with one exception that I will not mention here. I will say though that it involves a military undertaking which to me drug down part of the movie. I get what they are trying to say, but it seemed like a silly idea.

On a personal note I would like to say thank you for developing Dr Wu as a character more so that one can see why there are inaccuracies in the dinosaurs. Also I would like to compliment the wardrobe or firearm group whoever the hell is in charge of that because the gun that Chris Pratt carries is one of my bucket list firearms. A steel and rosewood, lever action, 45.70 government. It’s like happiness in the shape of a firearm.

All in all while predictable and not very heavy in plot the movie was very entertaining, and completely worth the money spent to see in a movie theater. It’s fun to watch and all around entertaining. You aren’t there to go all the Vinci Code, you’re there to suspend your disbelief and watch dinosaurs jack some stuff up. 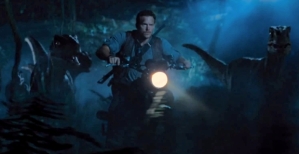 Owen: What happened to the sibling?
Claire: She ate it.

Masrani: So the paddock is quite safe then…
Claire: Yes. We had the best structural engineers in the world.
Masrani: Yeah, so did Hammond…

Owen: Watch your six! Raptors got a new alpha!

Fun Fact: Indominous Rex is much like the dog Maxx, in Man’s Best Friend…she is an amalgam of multiple dinosaur species and various other animals that give it borderline extra natural abilities. Personally I think it looks like an extra large Allosaurus with elongated frill spikes, and honestly she’s a freaking bad ass.