On Thursday I talked a bit about my own personal healing and the numbers I am pulling. I made some notes that I need to make sure I am casting Lifebloom more often and watch overhealing. Today, I would like to look at what gear I am wearing and see just how effective it is in comparison to what AskMrRobot inforgraphics are saying about how I should be preforming when compared with other Resto Druids with the same ilvl. First, here is a link to my current gear and spec. I know that I do not have the best gear, we have only completed a few bosses in Normal Highmaul. But I have been running LFR BRF and do have some gear from the random garrison missions in BRF. I am running with the 4 piece bonus, which I am enjoying, though I need to look at the benefits of the bonus a bit more.

As I mentioned last time, I am enchanting my weapon with Mark of Shadowmoon but I am unsure if I need to keep using it. It might be more beneficial if I were to change to the haste enchant. I am also about to make Stone of Fire; need only 4 more Savage Bloods! I think this trinket is actually pretty nice. Sure, it has versatility on it and that is not my favorite stat, but the amount of intellect it gives and the increase from mana pots is really nice! In checking the logs, the intelligence proc was up 30% of the time, which I think it pretty good when it comes to a procing trinket with a high internal cooldown. ( The Strength, Agility or Intellect proc chance is 35%. The stat proc lasts for 15 seconds and the internal cooldown is 55 seconds.) I want to check out the logs again once I upgrade the trinket to the Stone of Fire.

Now to take a look at some of the AskMrRobot infographics. I think this is a really neat tool that can help a player see how they compare to others at their ilvl. First, the picture below on the top is what healers on The Butcher should be doing at my iLvl. So the 95th percentile of resto druids are doing 41k, way higher than I am! Right now, I am hitting just in the green at 74th percentile, which is good, but I am happy to see there is room for improvement. The picture on the bottom is the over all for the Twin Ogron. I ended up doing 22k on the Twins which is pretty good when comparing it to the normal for my ilvl but when I first saw that number I was shocked since it was so much lower than what I can pull on other bosses. 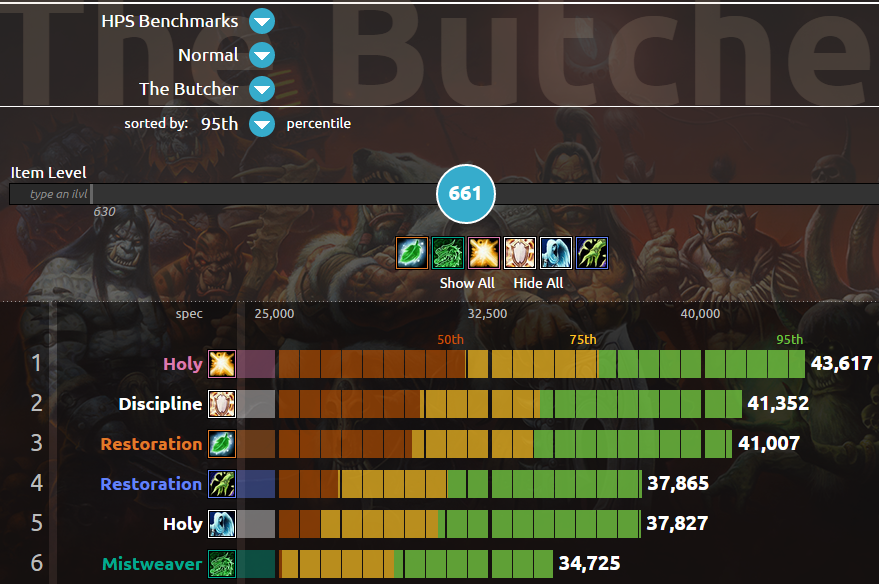 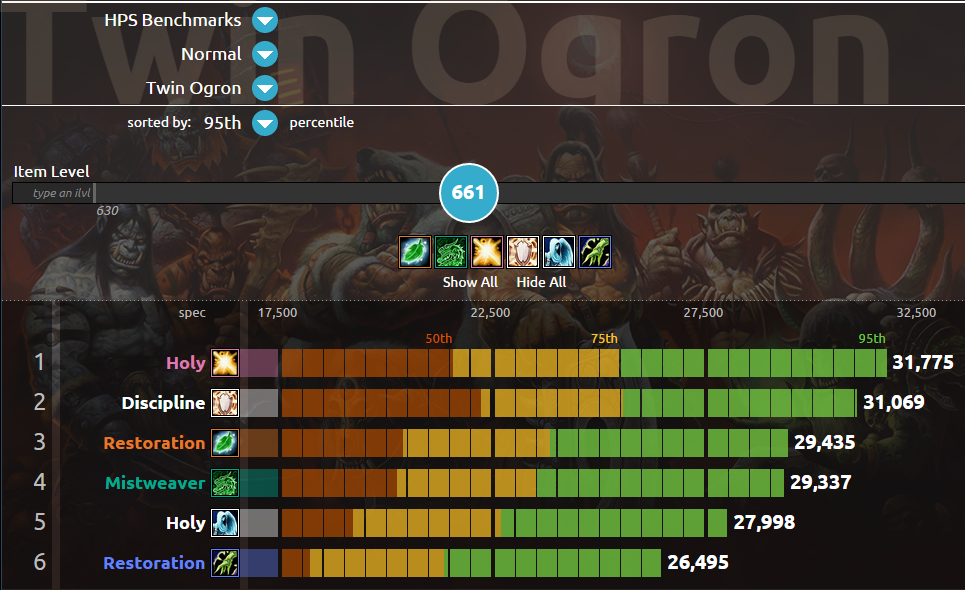 The first infographic is talking about how this fight went overall and how I compare. I am going to use two very different fights and show how I did in both. The picture on the top is The Butcher and the picture on the bottom is Twin Ogron. This section shows how well I performed in the fight. For The Butcher It takes into account potion use, avoidable damage, cleave, and HPS. For the Twins it looks at potion use, interrupting shout, HPS, avoidable damage, and enfeebling roar. For The Butcher, it is pretty easy to make sure you use a potion, and since I am ranged, to avoid cleave and the other avoidable damage. Most ranged can get those numbers. For HPS, I scored a 7.4 out of 10. This number reports back to the picture above and shows where I am on the scale. As for the Twins, I did a little less hot. Of course I remembered to use a potion (or I would be OOM fast) and I avoided the interrupting shout. HPS is down from The Butcher which might be accounted in the fact that I am running from fire about 50% of the time. Or I am avoiding fire way less than 50% of the time with only a score of 4.7…..ouch… I also got a score of 0 for running in for enfeebling roar. I maybe ran in one time, no good. As you can see the complexity of the boss is much different for me as a healer in Twins than it is for The Butcher. Raid awareness is much harder for the Twins, and something I need to work on, but that fire…it is horrible! 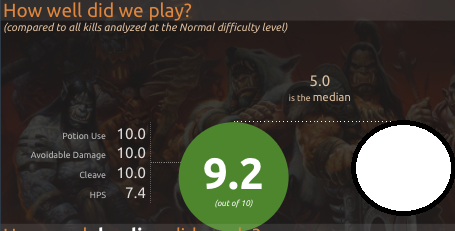 The next section on the infographic just shows how much HPS was done for the fight. As stated above, I did 33k on The Butcher and on the Twins I did 22K. 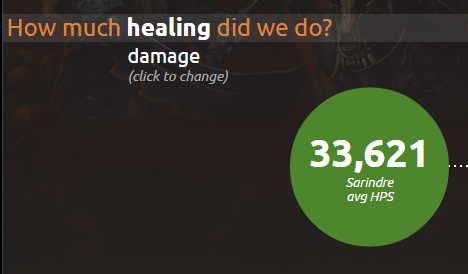 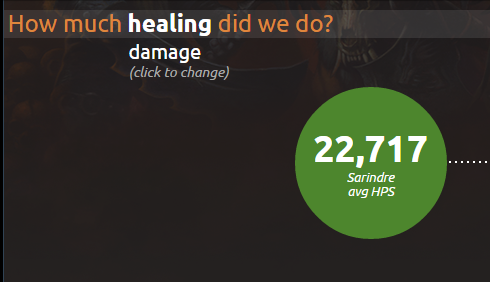 The third section of the infographic asks “Is that good healing?” On the top is the number for The Butcher and on the bottom is Twins. This shows how the healing looks in comparison to people in Normal Highmaul.  My numbers are looking good, but there is room for improvement. I think that if I increased my raid awareness (like avoiding the fire in Twins) I will be able to increase these a bit.

To me, this is the most important graphic. I want to know how I am doing in comparison to other Resto druids at my ilvl. Resto Druids are great healers and with our HoTs we are able to saturate the raid in heals. For the Butcher, 74th percentile is pretty good. There is not a lot of movement for me that fight. I just need to ensure I keep Lifebloom up and use Nature’s Vigil more often. I also think I need to watch when I am doing Tranquility as I wasted it on this fight and it was mostly used as an overheal. As for the Twins, 68th percentile means I could show a lot more improvement. When looking at the logs (below) I again did not cast Lifebloom enough and it seems that there were not enough people in the range of Tranquility. Per usual, my overhealing is high on Rejuv and Germination, but it is not too bad on other spells. This lower percentage could be due to the fact that I am moving around a lot more and there is a wide variety of damage due to the moving fire. 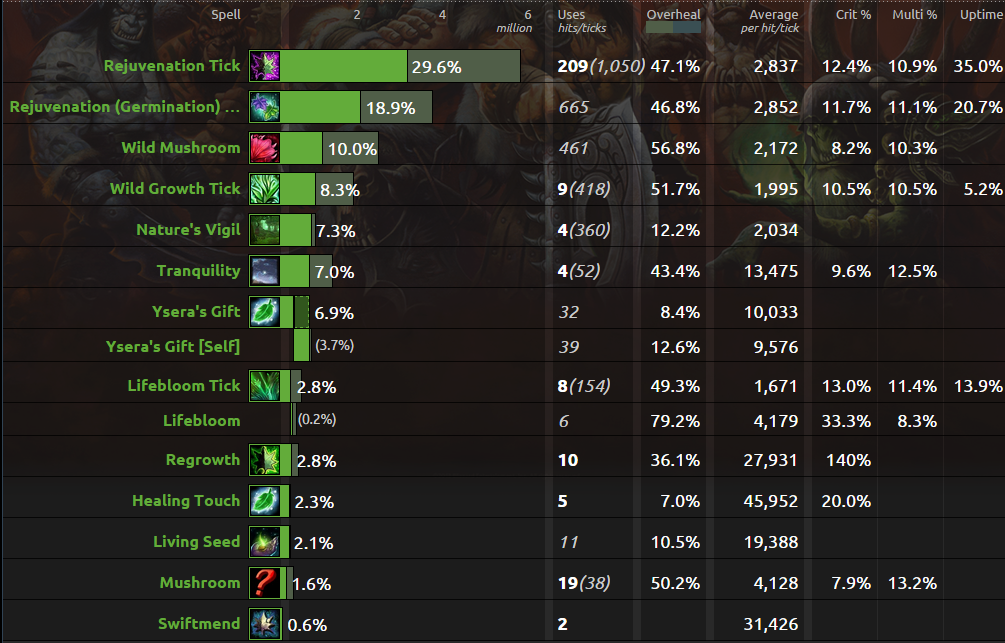 Looking at the logs from both of these fights makes me wonder two things:

2. When does everyone use Incarnation: Tree of Life or do you even have it? it took me a while to even get on using it every fight and it seems that if you time it right you could be using it twice a fight at times. I have been trying to remember to use it every fight but there are times when I just do not use it nor think that it is needed in the fight. I do use it in Brackenspore all the time when the Rejuv Mushroom is out and I can just sit there and spam the raid with Regrowth! But I am really unsure if Force of Nature or Soul of the Forest is better than Tree of Life. What are your thoughts on the talents?

As per last time, any advice would be great!

I am a 29 year old from Pennsylvania. I am married to a wonderful husband and we have two children both named after super heroes! A girl who is 4 and a boy who is 1. Most of my time is spent working, being a mom, and gaming.
Uncategorized
|  Tags: Healing, Healing, Raid, Raid, Resto Druid, Resto Druid, Tree, Tree, world of warcraft, World of Warcraft, WoW, WoW